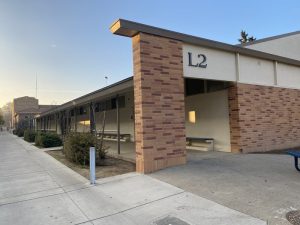 TURLOCK – Following the recent completion of several construction projects throughout Turlock Unified School District, the Board of Trustees last week gave approval for improvements on other campuses to move forward.

Work on the new Turlock High School science building was finished last month and students are officially attending class inside of the $18.4 million project, while next door at Julien Elementary School a brand-new office welcomed students back from spring break. The new improvements are just two of countless projects made possible by the passage of Bond Measures N and O by Turlock voters in 2016, and TUSD is currently in the process of completing even more at THS, Roselawn and the District Farm.

TUSD in January solicited a Request for Proposal for the renovation of the THS B, L and East Wings, which Assistant Superintendent of Business Services Barney Gordon explained at the time as a lease leaseback agreement. The difference between a hard bid and the lease leaseback process is that the district is able to select a contractor based on who will provide the best value, not who can provide the lowest price.

It’s a complex process which sees the top three candidates interviewed and scored, and TUSD originally estimated the three-wing renovation project would cost about $6.3 million in total. TUSD entered into a lease leaseback agreement with CT Brayton & Sons in March, and on Tuesday Gordon returned to the Board with the project’s total sublease amount of around $5.7 million with built-in contingencies.

While the project is expected to exhaust the remainder of Measure O funding set aside for high school improvements, contingency returns from the science building and Julien office will allow the renovation to take place without utilizing local redevelopment agency funds.

“We’re excited, for once, to provide an estimate that is pretty significantly less than what we expected,” Gordon said. “…This plays really well into our overall plan.”

Construction on the B, L and East Wing renovations is anticipated to begin June 1 and be completed by February 2022 after the Board approved the sublease amount last Tuesday.

Students, faculty and the animals at the District Farm on Taylor Road will soon be safer than they were before thanks to the upcoming completion of the property’s security fencing, for which the Board awarded a bid to Golden Bay Fence Plus Iron Works, Inc. during the same meeting.

He also noted that the department opted to spend about $20,000 more for new modular buildings, rather than purchase refurbished ones as had been done at other sites. The lifespan of modular buildings varies, Richardson added, but problems with refurbished classroom buildings purchased for Julien in the past set that particular project back a year.

“Knowing that we’re investing into this property and wanting to have it be a successful site for a very long time, we looked back at our funding sources and determined it would be appropriate to move forward with requesting the purchase of new versus used classrooms for this campus,” Richardson told the Board.

Richardson said he anticipates the Roselawn campus to receive the modular classrooms in early fall.

For more information and to stay up to date on TUSD improvement projects, visit https://www.turlock.k12.ca.us/constructionupdates